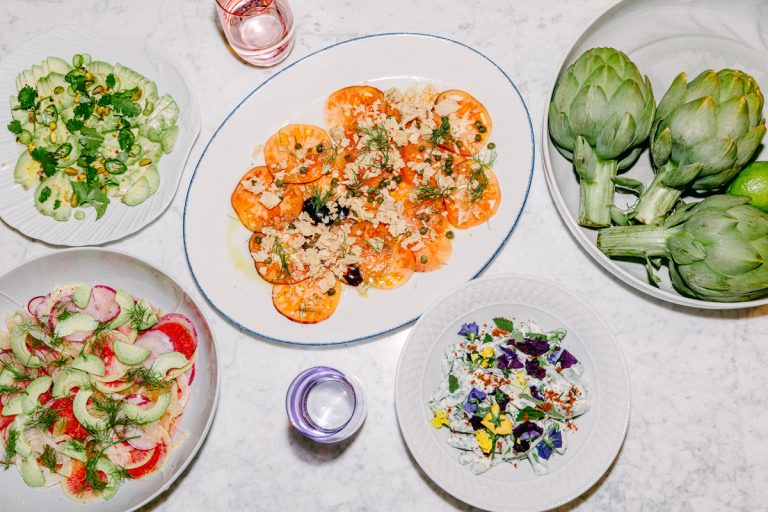 Intermittent fasting. You’ve probably heard of this buzzy wellness concept that’s been growing in popularity over the past decade. From celebrities to doctors, everyone’s talking about intermittent fasting. The conversations typically circle around how effective it is and how good people feel when they’re eating this way. But I remember the first time I heard the words “intermittent fasting.” I tried to block it from my mind, writing it off as what clearly seemed like a starvation diet. If you don’t eat, you lose weight—anyone can tell you that! (Or, at least, that’s what my internal monologue tried to convince me.)

Little did I know, there’s an abundance of research behind intermittent fasting. And while it can lead to weight loss, the benefits run so much deeper. All eyes are on this eating practice as research has begun to materialize surrounding its ability to “clean cells,” increase longevity, and decrease the risk of common diseases like diabetes and heart disease. Adding to the list, intermittent fasting keeps your DNA and cells healthy, slowing down the aging process. I’d argue that it’s the closest thing to finding the fountain of youth.

How does intermittent fasting lead to weight loss?

Let’s talk about how focusing on when you eat (and not worrying so much about what you eat), can jumpstart your metabolism, lower your lifetime risk for major diseases, and may help you live longer. Intermittent fasting is all about burning through your sugar stores and getting to a place where your body starts burning the fat it already has stored. On a normal day, our body uses the food we consume as energy. When we fast, our body is forced to move from burning sugar in those regular meals for energy to burning the fat that’s already present.

John Hopkins neuroscientist Mark Mattson calls this “metabolic switching.” You essentially stop feeding your body to encourage it to switch from running on regular meals for energy to running on its fat stores. And voila—this is how intermittent fasting helps you lose weight.

What is ketogenesis, and how does it impact blood sugar, inflammation, and metabolism?

Let’s chat ketogenesis. Our bodies rely on glycogen which is stored in the liver for energy to move, shake, dance, and just be alive in general! We get glycogen from the food we consume, and as humans, we are constantly burning it just to function and stay alive. Even when we’re sleeping, we need fuel! As time passes since our last meal, those glycogen stores begin to decrease and become depleted. You may recognize the sensation of depleted glycogen stores as feeling “hangry.” When our bodies begin to run low on glycogen, fat cells release fat that’s sent straight to the liver to create new fuel. In essence, you are literally burning fat to stay alive. This process is where ketogenesis occurs. Simply put, ketones are released into the bloodstream.

This is where the magic happens. According to the National Institute of Health, “(Ketogenesis) enhances the body’s defenses against oxidative and metabolic stress and initiates the removal or repair of damaged molecules. The impact of ketogenesis carries over into the non-fasting period and can improve glucose regulation [blood sugar], increase stress resistance and suppress inflammation.”

Ketones also send a signal to the brain to release a molecule called BDNF. BDNF is responsible for strengthening neurons and neural connections in the part of our brain that deals with learning and memory. Literal brainpower!

When our bodies are continually exposed to fasting periods, we train our metabolism and our cells to be better in the future no matter what kind of stress they’re exposed to. In a world where we’re exposed to oxidative stress through pollution, alcohol, endocrine disrupts, and plastics, this is pretty amazing news!

What are the long-term benefits of intermittent fasting?

How to start intermittent fasting

Generally, people tend to follow one of two intermittent fasting routines. One is the daily fast. Many people tend to use this method as they find the daily routine more approachable and easier to stick with. During a fasting period, drinking water is crucial and beverages such as black coffee, unsweetened teas, and sparkling waters are okay. Beyond that, abstain from snacking and consuming meals as that prevents you from achieving the ketogenic state needed for intermittent fasting to work. Additionally, research shows that it takes about four weeks to “adjust” to intermittent fasting. Note that you may feel tired, irritable, or “hangry” as your body gets used to fasting. You’ll eventually adjust and begin to reap the rewards of scheduled eating.

The daily fasting method is usually followed by picking a time period for fasting and one for eating. Most commonly used is the 16/8 method. Breaking the day down into 24 hours, 16 are designated for fasting and meals are consumed over a period of 8 hours. Know that consuming high-calorie, nutrient-deficient food in your eating window will outweigh the benefits of following an intermittent fasting routine.

While you can structure the 16/8 method how you’d like, finishing your eating window after 6 p.m. can be a helpful way to obtain a more normal balance while fasting. This could look like finishing your last meal of the day by 6 p.m. and eating your first meal the next morning no earlier than 10 a.m. Between 10 a.m. and 6 p.m., you can eat normally without restriction.

This method involves five days of normal, healthy, and unrestricted eating followed by two days of restricting your calories to about 25% of your daily needs. This equates to about 500-600 calories only, two days per week. This can easily be achieved by fasting through the morning, then eating a satisfying large lunch, followed by a light late afternoon filling snack. You would then fast again until the next morning when you return to a normal day of eating. Many people use Mondays and Thursdays as fast days.